We took a shortcut after getting to the lake. Most people didn’t see us slip out of the group, partly because we were behind them and partly because they were involved in their own conversations. We walked hand in hand through the park admiring the banks of the lake and the waterfowl. But mostly I was admiring her. The sun was warm and the wind cool. And time stood still. It was like a thousand times before in other places. We love walking together. We loved it since before we were married; walking the shores of lake Valentine dreaming of life together. We would have never dreamed of this.

I looked over to see Tara crying, watching the group of purple-shirted runners continue without us. “I want so bad to be able to run with my friends.” These were new kinds of tears; from brokenness. We had fought other tears all morning because of that feeling you get when people show their love and support for you. What do you call that emotion? When someone pours out generosity. Or they weep for you. Or when you get a card from someone you had no idea knew or cared about your situation. It isn’t sadness, and it isn’t really joy. It is gratefulness but there is a lot more. I don’t know, but it always makes me want to cry.

Anyway, our walk continued to a place that intercepted the race course. We waited by the path and looked forward to returning the show of support. But we weren’t expecting what we would happen next. It was the end of mile 6 for the 10K and near the end of mile 3 for the 5K. Runners were exhausted and breathing heavy. As the Team Tara runners noticed Tara, we watched some faces go from “I want to quit” to “I’ll never quit”. They dug in to the final leg of the race as if inspired. We heard many people say, “We are doing this for you.” or “This one is for you.”

People love that woman of mine. She hates attention usually, but today she received it well. People who know Tara well, know she is a giver not a taker in life. She sacrifices for her family and others. Tara is surprised that people would support her like this, but I am not.

So we will remember that place always, the place that intercepted the race course. Where we stood and wanted to encourage, but instead were encouraged ourselves. We have stood here before, where faith intercepts life’s race course. 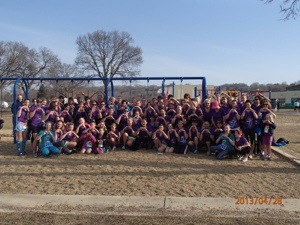 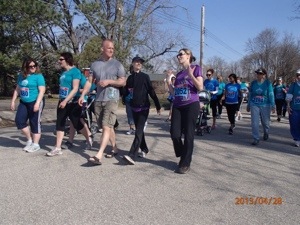 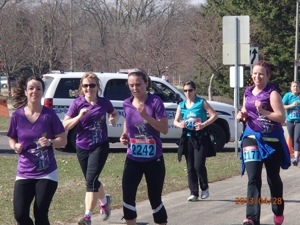 7 thoughts on “The Interception of Course”